Posted at 15:21h in BackupAssist by Neil Perry

Hopefully you’re already aware that one of the great new features coming in BackupAssist version 6.4 is the native support for iSCSI targets. This feature allows you to run Windows image jobs that fully support incremental updating and history.

This is a great feature for disaster recovery backups as it negates the need to have local media (typically USB hard drives) attached to every server or workstation you want protected.

I have covered the idea of iSCSI backups in this previous post, but as part of my help with the beta testing of BackupAssist I’m running some real world speed testing on my own Windows 7 box. The aim being to see how long backups will actually take in order to to get an idea of how often they can be run within the day to provide as up to date a backup as possible of the full system drive.

So for this test I am using my Dell XPS 8300 workstation running Windows 7 64 bit. It has a Core i5 CPU with 4GB ram with a 80GB Windows system partition with 27GB in use. The network is only 100Mbps. Hopefully fairly typical of a client specification machine.

Setting up the Windows image job

Configuring the Windows image job is very similar to when using a local drive as a destination but the new option allows you to use an iSCSI destination directly. The advantage of this over setting up the destination within Windows is that it’s only “mounted” during the backup procedure so it can be connected to by another server afterwards if required. 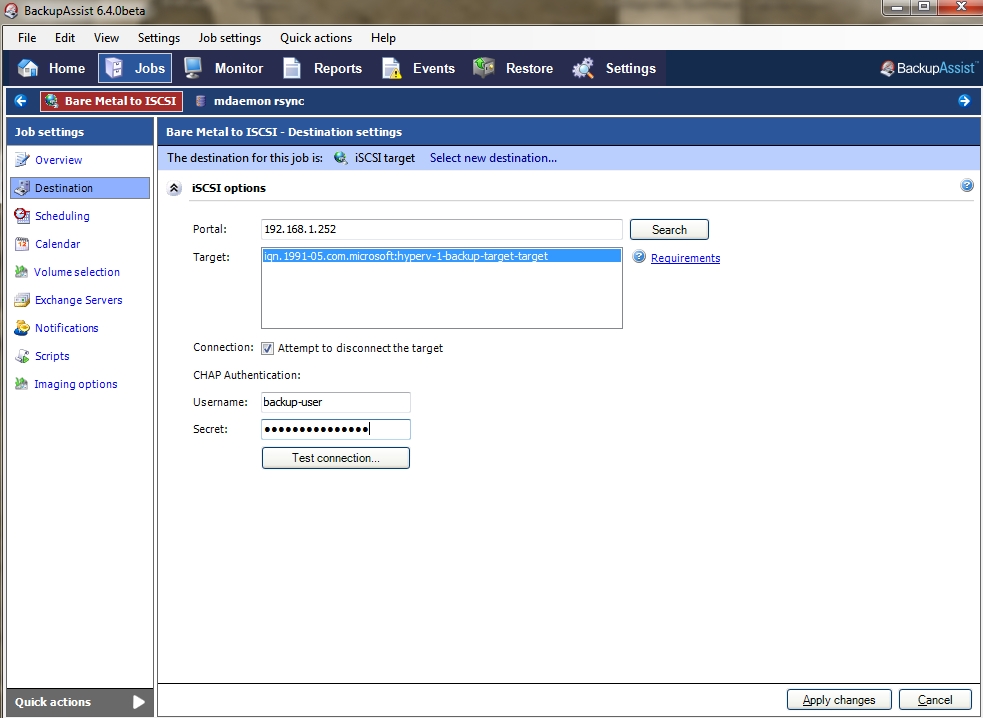 As expected the first image backup took the longest and completed within 2 hours but after that subsequent updates only took around 15-20 mins.

At this point i decided to see how often i could run these jobs and what effect this had on the run time. The theory being that if the job runs more often, less data has changed and so the job may run quicker.

Indeed this proved to be true, and my average job time dropped to 5mins. During the backups there appeared to be very little effect on my machine’s performance, in fact I couldn’t actually notice it was even happening.

If you’re interested in contributing to the beta test program for BackupAssist, don’t forget you can still sign up here to help with 6.4.