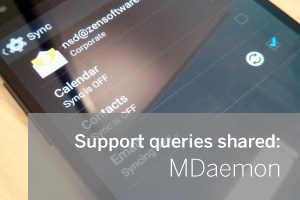 UPDATE: 10/12/13 Google released Android 4.4.2 today and I can confirm that this now fixes the Exchange sync issue on my Nexus 5. See below for more details…

A couple of us in the office have just taken delivery of some shiny new Nexus 5’s – fantastic devices we’re really happy with but we’ve unfortunately both come across what looks to be a known issue setting up the ActiveSync connection to synchronise them with MDaemon Messaging Server.

MDaemon has an integrated ActiveSync server but this issue with the devices will also apply to those of you who use Microsoft Exchange.

When you add an ActiveSync account you’ll find the initial synchronisation works as you would expect. However, after this first successful sync, the account can no longer send or receive any data rendering this part of it completely useless for sending or receiving email or doing anything with your calendars and contacts.

Upon closer inspection of the account settings it appears to be constantly attempting to synchronise. This process keeps the email application running which, as  you can imagine, hits the battery life pretty hard.

Unfortunately re-creating the account doesn’t seem to help, neither does changing the setting from Push to sync every X minutes.

Unfortunately, until Google find a fix for this issue the only work around is to not use ActiveSync and instead switch to a standard IMAP connection. ( please note if you don’t already have IMAP access open on your MDaemon server you will need to do this first).

We’re hoping this issue’s resolved pretty soon and we’ll update this article as and when it happens.

(Update: 13th Nov) The latest news is that Google is about to release Android 4.4 Kitkat for the Nexus 7 and 10 devices today but early indications would suggest that there are no fixes added for the ActiveSync issue we have seen on the Nexus 5. For this reason until this is proven to be working we recommend that you don’t upgrade if you are using these devices with an ActiveSync account.

(Update 2: 22nd Nov) We are now seeing more reports of the same issue effecting all users of 4.4 kitkat on any device that now Supports it. A Google representative has confirmed the issue is being worked on but there is no expected fix time. If you are seeing these issues on any kitkat enabled device I strongly suggest you add your thoughts to the Google groups post

(Update 3:24th Nov) Sorry not much of an update but looks like Android Police have picked up on this ever-growing issue now that it is effecting any devices running 4.4

(Update 4 26th Nov) Good news Folks ALT-N are looking at a  workaround  for MDaemon Servers that appears to stop the Sync loop problem. Early indications look very promising! So fingers crossed there may be a fix out in the next release of MDaemon even if  Google don’t fix what they have broken in Kitkat

(Update 4 6th Dec) Good news again folks, Google have caught up and have now released the Android 4.4.1 update which is rolling out to Nexus 5 devices as we speak and soon for all other compatible Nexus devices. This update brings fixes to the camera but hidden in the background it also addresses the Exchange (ActiveSync) issues. I can personally confirm this is now working as expected on my Nexus 5 connecting to MDaemon 13.6

(Update 5 10th Dec) Just for clarity 4.4.2 has now been released for all Nexus devices to replace 4.4.1 and is also working fine for ActiveSync in MDameon 13.6